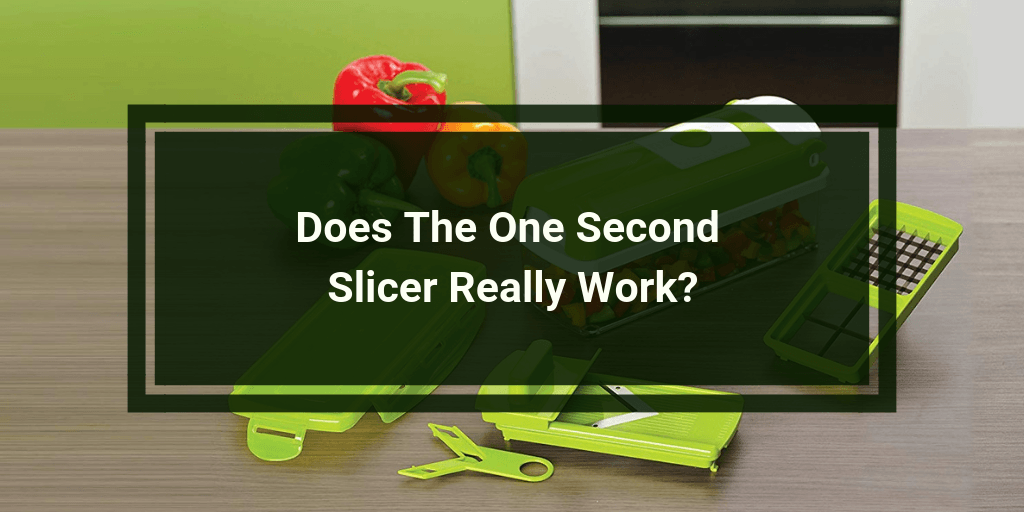 Over the years, many products that make cooking faster and more convenient have been released. Manufacturers promise that their solutions will help you save time and make food preparation much easier. One Second Slicer claims to do exactly that. But how good is the One Second Slicer really? If you want to know more about how true the promises are, here’s a comprehensive One Slicer review that gives you all the information you need to see if this really does live up to the hype.

What Is the One Second Slicer?

The One Second Slicer is a food preparation station that allows you to slice and dice many different foods in a much shorter time than you would with a regular knife. As an added bonus, it’s much more convenient and should yield much better results than preparing food by hand.

It allows you to chop, mince, slice, and do all kinds of other things with various types of food. The claim is that you can prepare all kinds of food in a matter of minutes and in the most convenient way possible.

How Does the One Second Slicer Work?

The mechanism behind the One Second Slicer is very simple. You get various lids with different blades that you would use to prepare different foods. Simply press the food on the lid and it will fall into the container, which you can use for storage or to serve it.

This way, you get evenly cut ingredients that you can mix in the container to create all kinds of different meals. If you want to store your food, you can simply snap the included keep-fresh lid onto the container and put it in the fridge.

The One Second Slicer is a 5-piece set that has a variety of different features for making food preparation more convenient. You get various tools that help you prepare different types of food without a hassle. Here are some of the main features:

Container collects all your sliced food

There’s a container that collects all the food after slicing, which can be used for serving or storing it. The size is about the same as a standard loaf of bread, so it’s compact and easy to store.

You also get a lid that you can snap onto the container. The slicer itself comes with a lid, so you can leave the slicer on the container of sliced food and stick it all in the fridge if you wish.

The stainless steel blades allow you to cut even the toughest of fruits and vegetables, so you should have no issues with mixing different ingredients into your meals. There’s a V-slicer that is made specifically for slicing foods such as cheeses and salami as well.

How Easy Is It to Clean the One Second Slicer?

When it comes to maintenance, the One Second Slicer isn’t really demanding. Cleaning shouldn’t be an issue, since all of the parts are easy to clean with just water.

It’s important that you clean both the container and the lids immediately after you’re done with it. Not only will this make cleaning easier, but will also prevent food residue buildup.

What Can You Slice with the One Second Slicer?

Where to Buy the One Second Slicer?

Many online platforms such as Amazon sell it, so the most convenient way of buying it would be to order it online. Doing so will probably help you avoid some issues we discussed in the complaints above.

You can also find this product in local stores, such as Walmart, Walgreens, and Bed Bath & Beyond. Occasionally, you might run into some sales or coupons, which is always a good thing.

Swagbucks.com is another site to consider since they help you earn cash for things you already do online and you can also earn cash back for shopping via their site.

Ultimately online retailers like Amazon.com can help you save the most on purchases and offer benefits like FREE Guaranteed 1-2 Day Amazon Prime Delivery. All these deals will allow you to get the One Second Slicer at a much cheaper price.

Every infomercial presents a product in the best light. They make all kinds of promises and generally do a good job of convincing you to buy a product. The One Second Slicer is no exception. For a more balanced view, we need to go through some of the complaints that users have had about this product:

Not suitable for all foods as advertised

The main issue that a lot of users have encountered is that the slicer doesn’t really do what it’s supposed to. Even though it should be able to cut all kinds of foods, you still need to do some cutting yourself before you can put the food into the slicer. This is because it’s not big enough for everything, and the blade quality might not be exactly as good as the infomercial states.

Another complaint is that the customer care isn’t really that good. People who have ordered the slicer online have had issues with shipping, as well as refunds. This is why you should use Amazon.com to purchase this which has better customer service.

This doesn’t necessarily mean that the product is bad, as even the best products in the world also receive less-than-enthusiastic reviews. A more useful metric of note is that positive reviews outpace the negative for the One Second Slicer. There are many users that have found it very useful, so it might be worth checking out.

It usually retails for about $35 in stores (cheaper online). That is quite pricey for a small device that cuts fruit and vegetables. You basically getting two storage containers with a blade, so the cost seems a bit excessive.

If you’re not impressed with what the One Second Slicer has to offer, there are other options that you can check out.

Gourmia Multipurpose Vegetable Chopper Set:  It does the same thing, but it’s equipped with more blades that you can use for specific foods. Its construction is also a bit more durable, so it fixes some of the issues that the One Second Slicer suffers from.

Does the One Second Slicer Really Work?

The short answer is – yes. Despite its drawbacks, it does a good enough job, but it might be a bit disappointing in the context of the hyped-up infomercial. Far from a bad product, the One Second Slicer can really make food preparation easier and faster.

Is it worth the money? That will be your decision. You do get some features that should come in handy; just be aware of the potential issues mentioned above. You can totally try it out for yourself, just make sure to get it from somewhere with an easy return policy such as Amazon.com.

After reading the One Second Slicer review, you should now have all the information you need to make an informed purchasing decision. But if you still have questions, you can visit their Amazon page and read the questions and answers there.

Have you tried this slicer before? If you have, please let me know your thoughts in the comment section below.

Eddy with a y

The One Second Slicer is a food preparation station that claims to help you slice and dice many different foods in a much shorter time than you would with a regular knife. But is that really true or all hype? Well we've provided you all the dirt down below.