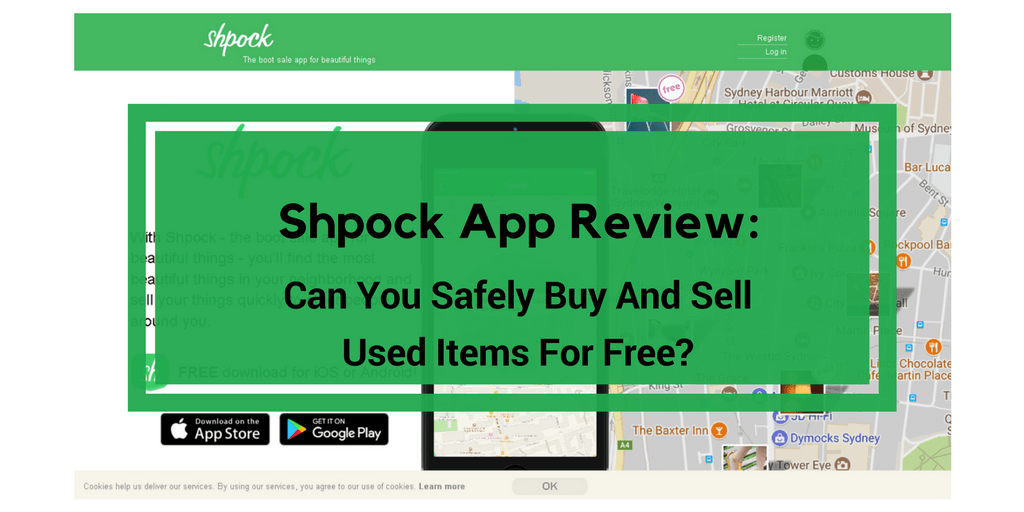 Back in the day when you wanted to sell stuff you’d either pay for a listing on your local newspaper or hold a garage sale. Thanks to apps like Shpock, you can hold a boot sale on your phone, for free. But with so many apps claiming to connect us with buyers and sellers of used stuff nearby, you can never be too careful. You are probably wondering whether it’s safe to use the boot sale app and that’s why you are going through a couple of Shpock app reviews. Before you even think of using the app, you might want to read this Shpock app review.

Shpock found online at www.shpock.com is a ‘’boot sale’’ app and website marketplace where you can trade new and old stuff like electronics, clothes, household items and such with people near you. Shpock (which stands or ‘’shop in your pocket’’) was launched back in 2012 in Vienna, by Austrian developers Strbac and Katharina Klausberger.

How Does Shpock Work?

So, here’s how it works basically.

For sellers, all you do is take up to five photos of the item you want to sell, describe it, price it and post it up. Then Shpock will pick up your location and show it to people closest to you who are using the app.

For buyers, these items will show up as listings starting with those closest to them, to the furthest ones. Once a buyer sees something they'd be interested in, they’ll hit the seller’s inbox with an offer and once you agree on the offer, you can now start talking of how you’ll get your item.

With Shpock buyers and sellers agree to either do the exchange in person or by post.

Buying and selling is free on Shpock. However, according to the app, you can ‘’increase chances of selling’’ an item by sponsoring your item, but more on that later.

How Much Does Shpock App Cost?

Shpock is free to download and use. You can get it on Google Play or iTunes depending on what device you are using. You can also use the Shpock desktop app. Did you know you can actually get paid to download apps like this at Swagbucks.com? Well now you do. You can also make money for things you already do online such as visiting websites, watching videos and more using Swagbucks.com.

Well, the app has some features designed for both buyers and sellers, and they include all that in a Shpock Premium Membership plan that includes

Shpock claims that a premium membership plan frees you of ads that pop up on your screen from time to time.

You get to upload up to 10 photos of the item you want to sell instead of 5.

With the Super Boost feature the items you sell will appear more frequently and always on top of the pile to buyers near you.

You can also share the items you sell on Social Media for free, or turn on alerts for items you are watching out for.

What Items Can't Be Sold on Shpock?

There are a couple of rules you must follow before selling on Schpock. You can’t sell living things, food items, anything that might cause physical or emotional damage to someone, counterfeit or fake products. Also, you can't sell alcohol, drugs or cigarettes, basically items that require licensing All in all, you can’t sell anything illegal at Shpock. You can view the full list and rules here.

If you are looking to clear the attic or garage of stuff you no longer need, then Shpock can hook you up with buyers for free. And we all know how expensive sites like EBay can be. The best part is with apps like Shpock, or even OfferUp, VarageSale is that your next buyer might happen to be next door.

This is the part of the review where we reveal the bad and the outright ugly. There are a few complaints we would like to swing your way. So let's dive into them.

Getting a hold of the customer service is a nightmare, according to actual users of the app. We followed up on these claims and found that they only have two ways you can reach them; through email on support@shpock.com or by phone on AT: +43 1 934 66 29, 8am to 4pm, UK time. It takes a while for these numbers to go through and you'll probably stay on hold until you throw in the towel.

People are rude in there

According to users, some people are rude. This seems to be the case especially if you are extra inquisitive about something you want to buy. Apparently the admins do little about this so you better have some thick skin.

You can easily get ripped off

Be careful when buying something at Shpock. Someone may claim to have shipped an item you’ve already paid for only to realize it was a scam. Some apps like OfferUp and Vinted go the extra mile to verify shipping addresses and follow-up but that doesn’t happen at Shpock. Once you buy something and can’t schedule a face-to-face exchange with the seller, you are on your own buddy.

For you friends of the Better Business Bureau, Shpock is not listed at the time of this review. But this may be because the company is Austrian and they mostly focus their business in mostly Germany, the UK and of course Austria.

You’ve probably read something that has put you off in the complaints above. Well, apps like OfferUp and Vinted have a pretty solid way of verifying sellers. So you may want to check them out. And remember, you can make money using sites like Swagbucks.com so you don't have to deal with shady sellers to get a discount.

Technically Shpock is not a scam. Because some people have actually bought and sold stuff using the app and it’s also free to download and use. However, you can easily get ripped off both as a buyer and seller, since the apps rarely follow up on transactions. It seems scammers are winning, and the app's management couldn't give a rat's ass. They don’t have their own payment system and neither do they verify sellers. So, if you decide to use the app, just be careful. It’s not that safe.

Well, that’s about it when it comes to the Shpock app. Feel free to chime in with your thoughts by leaving comments down below.

If you've ever thought of selling stuff online, you’ve probably heard of the Shpock app that claims to connect you with buyers and sellers near you. But is the app safe to use? Is it just another scam? Read along and find out! It doesn't sound too good.